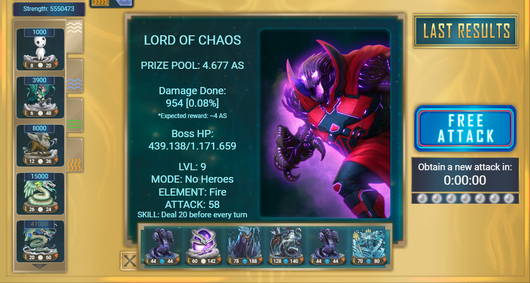 World Boss (or WB for short) is a feature added in v2.9.0.0 Patch. It's a place where a player can join and battle with the World Boss. Each player gets a free attack every 12 hours and the

Ascension Spheres reward scales with the ranking a player gets relative to other players based on the amount of damage done.

World Bosses are huge monsters that perish after they have been attacked 2000 times by the players. After a world boss is defeated, the next time it spawns, its level will be increased. Before v2.9.4.0 Patch, world boss stats used to scale with level and bosses had a limited amount of HP, so basically with low-level world boss and the super high armor and healing power, the battle would be hypothetically last very long, until the world boss dies, which means with only 1 attack, 1 player could perish millions of HP.

There are currently 5 world bosses, one per each element.

There are 2 input modes currently which are Heroes Allowed and No Heroes. Each mode will have different reward formula, based on damage dealt and total damage dealt:

The reward given to each player has more complicated formulas, where

$ n $ is the total amount of participants:

There is another version of World Boss called Super World Boss (SWB). It used to be one of rotating event features which was added in the v3.0.0.0 Patch, but in its current implementation, SWB has a 10% chance to spawn instead of a normal WB. It functions similar to World Boss, but can't be attacked more than twice, requires only 1500 attacks to kill and has double the

Extra AS is one of the rotating events that happens once every 8 days. Any boss hit during that day grants +30

for SWB). Further attacks done to the boss won't increase the bonus gained from the event. If the boss spawned before Extra AS and dies after the event has started, any hits done before the Extra AS day happens don't count towards the bonus.

Retrieved from "https://cosmos-quest.fandom.com/wiki/World_Boss?oldid=9871"
Community content is available under CC-BY-SA unless otherwise noted.