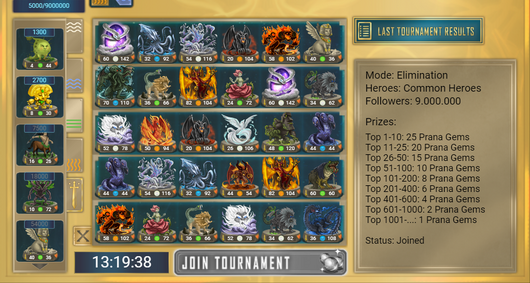 Tournaments is a feature added in v2.4.0.0 Patch, which is located in God's Miracles. Tournaments always start at 23:50 GTM. To join a tournament, you have to spend Universe Marbles which is the premium currency in Cosmos Quest. It's price is different on weekdays compared to the weekend and is free on Wednesdays:

Every tournament is different; things below will be set-up randomly:

Since v3.0.0.0 Patch, Universe Marbles are no longer rewarded and replaced with Star Dust. The prizes currently are divided in Prana Gems and Star Dust.

The prize pool is 70% of the total fee pool and 10% of the players acquire UM.

The formula for gaining Universe Marbles is

After a season ends, you will receive some extraordinary and special rewards. These include Prana Gems, Universe Marbles and one of three legendary heroes, based on your ranking in that season's tournaments.

Retrieved from "https://cosmos-quest.fandom.com/wiki/Tournaments?oldid=8560"
Community content is available under CC-BY-SA unless otherwise noted.