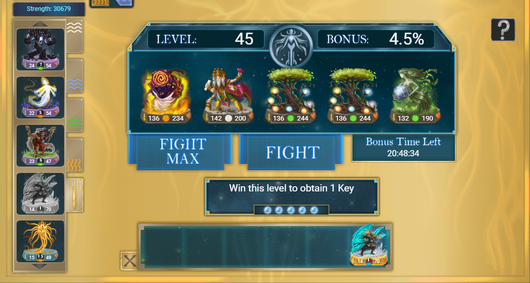 Daily Quest is a PvE feature which has unlimited level. Each level provides additional follower multipliers 0.1%. The Daily quest will reset after 23 hours and 45 minutes.

Just like the old version, you will be rewarded after surpassing every five levels:

By exceeding the Daily Quest 60, you might encounter a 1k level Common Hero, which is greatly stronger than any maxed legendary hero. James

Attack pierce up to
6 enemies
may also appear in those level, a well-known hero as the strongest when maxed because of its Pierce ability. Further than that, it is possible to encounter any 1k level Rare Heroes, for example a 1k Nimue

might appears in the sequence, which is hugely stronger than any maxed ascended heroes, requires at least an ascended heroes to solo. We can take Ascended Rei

+1 attack to All creatures
every 3 lvl
for the comparison. Basing on the formula, facing with 1k legendaries or 1k ascended while reaching the level beyond 100 is inevitable. However, no one has ever reached there and witnessed the power of the lineup. Imagine a 1k Ascended Geum

Attacking multiplies
attack by 2
with 425

This is the old version of Daily Quest which only available before v2.8.0.0 Patch.

Every five levels are completed, you will receive the following prizes:

Because Daily Quest is based on your followers, you can encounter any hero at any given level. This would mean having a low level common or even max level legendaries at the first quest, which makes it impossible to beat. A hero often appears in the daily quest and he/she always in the last position of a row, representative of the "final boss" of the quest.

Retrieved from "https://cosmos-quest.fandom.com/wiki/Daily_Quest?oldid=9823"
Community content is available under CC-BY-SA unless otherwise noted.